I have started working on crafting!

The current plan is to have two crafting roles: Materialist and Alchemist.

Materialists will craft items using machines known as matter kilns, which is a fancy name for a crafting station.

The process is simple: You bring materials to matter kiln, click on desired item crafting recipe and an item is made, granting XP for Materialist role. Higher Materialist level allows crafting higher level and value items. 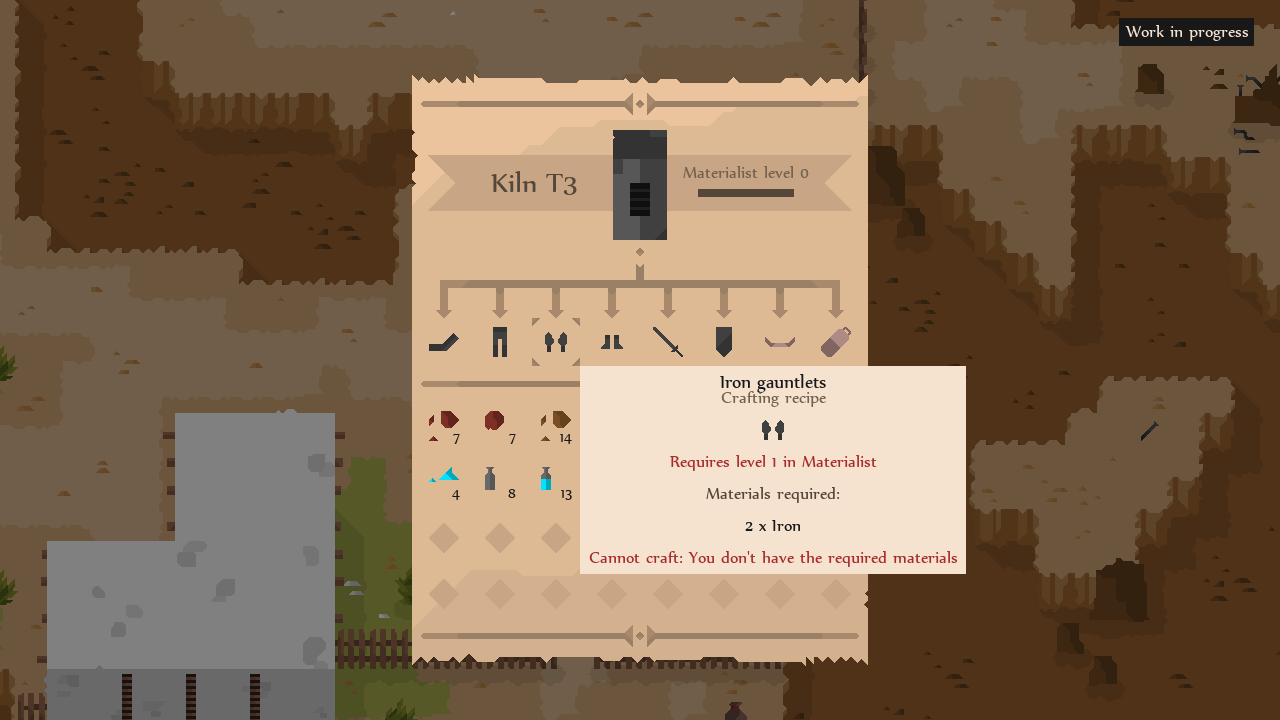 I was thinking about incorporating a timing minigame in the crafting process, but…

I want players to be constantly on the move, exploring new locations, completing quests, conquering challenges, and stopping only for a moment to turn collected resources into new equipment. I felt like crafting has to be as fast as possible to not waste exploration time.

So that’s why I decided to make it this simple.

But not mundane - I plan to have many matter kilns, each with a unique set of recipes. Some items will have more than one recipe, which will allow invested players to search the world for interesting kilns and make decisions. “Kiln with recipe A uses more resources, but kiln with recipe B is in infested ruins and I’m running out of arrows. Hmm…”

Kilns also come with lore attached to them.

What goes inside them was a well-guarded secret of the Azu’urunn Kingdom, only a few dozen people had access to that knowledge, and all of it was gone when the Kingdom was destroyed. New kilns are no longer made, and old ones are becoming faulty with time - eventually, they will all stop functioning. You fill find broken kilns and ones that are barely functional, with recipes that turn expensive materials into useless items because a part of the mysterious machine has stopped working properly. Your destiny as a Materialist is to gather enough understanding to be able to repair, reprogram, and maybe even reverse-engineer kilns, preventing the technology from being lost.

The Alchemist role is a bit different.

Aside from finding the kilns with efficient recipes, there’s little discovery in the Materialist role, kiln recipes are not concealed in any way. Meanwhile, Alchemists will have to discover recipes for items - materials and elixirs - by combining alchemical materials.

For example, in the upcoming version of the game, your character will be able to create disinfection fluid by combining alchemical silver and salt. Disinfection fluid is a key component for crafting healing kits.

The goal is to have a small number of alchemical components, with every combination producing a useful material. I imagine it will be very exciting to find new alchemical materials when each of them will be used to produce dozens of items.

Alchemy lore is tied to Erquaria lore. Many of the alchemical materials you will experiment with are imported from that strange land under the violet sun, land in which the art of alchemy originated. If you work hard, you may get a chance to learn from the true masters of alchemy - members of the Erquarian Alchemist Guild.

So that’s the crafting!

I’m having a really good time turning all of this into reality and I hope it sounds exciting.