As promised, this entry is about the game’s lore.

Now, the full lore is a dozen pages long, so for this entry, I’ll only share the timeline of the Locked World’s history.

The world’s map is at the end of the post.

Council of Worlds order to build the World Gate that connects Kayos, now known as the Locked World, to the World Network.

Council of Worlds order to sink a collection of confiscated magical weapons in Abyssal Waters.

Abysts are discovered by mages who were sent by the Council to check on the sunken weapons. Abyst Rush begins. Gate City begins to grow near the World Gate.

Demon Moon is being built.

Demon Moon was risen, the demon population shrinks rapidly from this point as they are banished to the Moon.

The Glow phenomenon is discovered: If a large number of abysts are in one place, they start glowing and it makes all sentient beings in the vicinity lose sanity. Council of Worlds bans the use of abysts and orders to lock Kayos. A year is given for evacuation, most of the colonists and abyst miners leave.

Celeraths - a corrupt family of nobles flees to Kayos. They use their wealth to acquire several abyst mining docks and quickly become influential.

Celeraths form an army of mercenaries. They take over the Gate City and rename it to Azu’urunn.

The eldest son of the family, Talyann, is crowned as a king of the Kingdom of Azu’urunn. Soon Celerath army takes over the rest of Rezelot.

World develops. The magic dampening effect of talkstone is discovered and talkstone-based teleportation spells were invented during this period.

Demon population grows because they are no longer getting banished.

Talyann the First dies. His son is crowned as the Talyann the Second.

Talyann the Second dies. His daughter Branna becomes the queen.

Talkstone is sent to Demon Moon and a new banishment spell is created. Demon War begins.

Demon War. Demons are being hunted down and banished. They gather into massive swarms to defend themselves and often retaliate, attacking human settlements.

The demon population is reduced to a minimum.

Abyst Cities - Eiralta, Grawas, Berelem, and Korrev - start a rebellion against the Kingdom, it turns into a war that spreads to all of Rezelot. During the first year of the War, the Kingdom achieves many victories against the unprepared rebels.

The Kingdom attempts to attack the city of Berelem. The King’s Army is ambushed in Edario’s Island. The Great Mage Edario traps the King’s Army in the Island and starts a desperate battle of one against thousands. He’s not defeated for hours, his spells slay hundreds of king’s soldiers. After he is killed, the army is in such poor shape that it has to retreat.

The Kingdom begins the siege of Iron Stronghold.

The Kingdom builds talkstone triliths. Triliths allow the King’s Army to move quickly around Rezelot and for a short time this advantage grants them a few victories. The Kingdom takes over the city of Korrev.

Army of Eiralta frees the city of Korrev. King’s Army tries again to take over Berelem. The Army is ambushed on the border of Bereland and is defeated. Berelem’s army pushes the Kingdom’s forces out of Moonrise Desert. The Kingdom’s army dwindles. To replace the soldiers, the Kingdom’s mages invent possessed armor. It’s speculated that if not this invention, the Kingdom would have been defeated in 184.

The Kingdom is weakened, the king becomes more desperate. The power of the rebel cities grow, the Kingdom shrinks rapidly. The king orders to build a new road around the Iron Stronghold, as the siege of Iron Stronghold is not giving any results.

The War Road is finished, the Kingdom launches the final attack against Eiralta. The War ends as the Kingdom’s army is defeated. The City of Azu’urunn is surrounded, and lords of the Free Cities send a delegation of mages to bring Talyaan to them. Mages attack Talyaan trying to defeat him, but he unleashes an unknown spell of vast destructive power. The magic lashes the Kingdom and kills everyone in it, including every member of the Celerath family and the City Lords.

Lord Atan, a noble of the now-gone Kingdom takes over territory north-west from Eiralta.

City councils are formed, they begin to rule the devastated Rezelot.

A massive wall is being built between the Fallen Kingdom and Eir Meadows to protect the civilized lands from the Kingdom’s demons and possessed armor.

The Glow occurs in the city of Korrev. The entire city is lost.

The world is recovering from the War. The Fallen Kingdom burns in unnatural, inextinguishable flames, hordes of possessed armor and demons flee from it, Lord Atan grows in power, rogues roam in the uncivilized lands. The Abyst Cities regaining power and are starting to suppress these actors of chaos.

The World Gate malfunctions and brings you to Kayos. 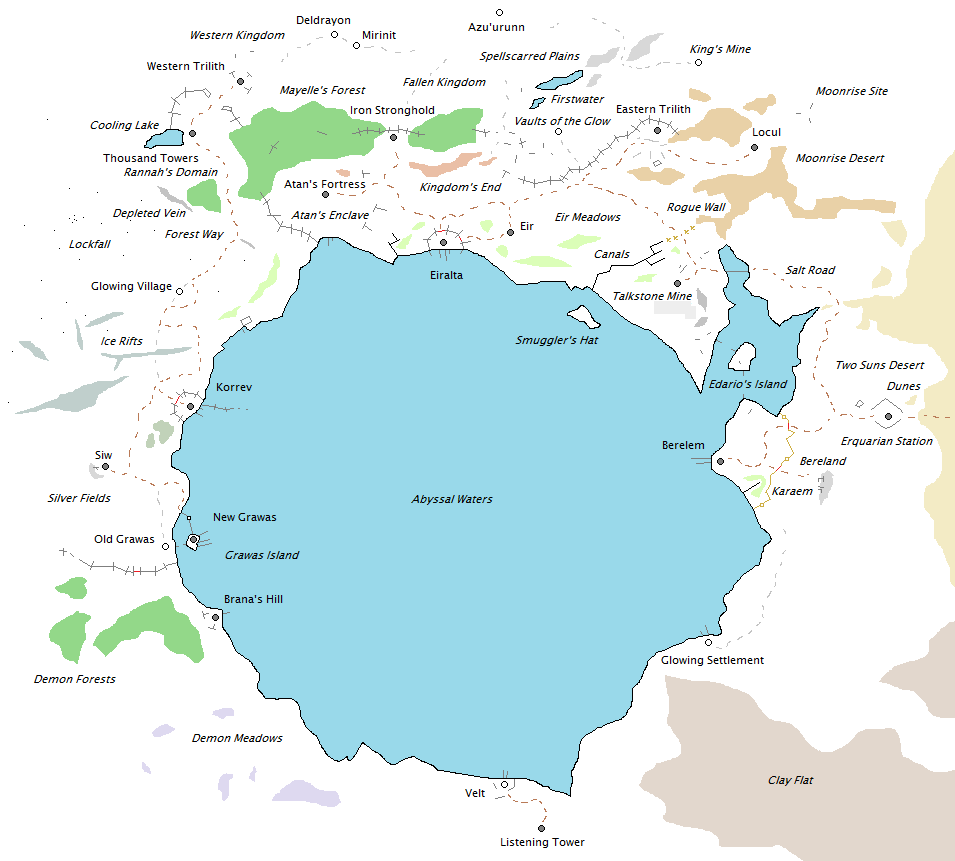 I hope this was interesting, if there will be a demand for it, I’ll make more lore-related entries.